One of the most quickly upcoming nutritional trends is food combining. Despite its new following, food combining has ancient roots dating back to Ayurvedic medicine. It doesn’t require calorie counting or macro counting, because it’s not about how much you eat. It does require attention to when you eat, in what order you eat, and what foods combine well with others. Food combining is all about optimal digestion.

Foods are grouped based on how your body digests them, and from there, it is determined the most beneficial combination and order to eat them in. If it sounds confusing, that’s because it’s very complicated, and modern research is still very scarce. Though despite that, food combining is still very much trending, and many insist on the benefits from it.

What Are the Food Groups? 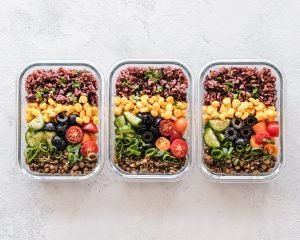 Foods are mostly grouped by their macronutrient (carbohydrates, fat, and protein), except for fruit and vegetables, which are slightly more complicated.

Correctly following the rules of food combining can be quite the task. The first is to start the day eating fruit on an empty stomach because it is very high in water content and so easy to digest. Any food group can be combined with nonstarchy vegetables and leafy greens. That even applies to fruit first thing in the morning, so feel free to add some spinach to your morning smoothie. In regards to timing meals, leave ample time to digest meals before eating another, a recommended four to four and a half hours in between meals. As far as meals go, there are favorable combinations and bad combinations.

Why All the Rules?

It may seem like a lot of rules, but the theory behind food combining is interesting. The goal is optimal digestion. When it comes to digesting different food groups, some are quicker to digest than others. In theory, if you eat a slowly digested food first, it can block quickly digested foods from digestion. Hence fruit recommended first thing in the morning. Fruit is absorbed super fast, in as little as thirty minutes, and so it clears the path of digestion for the rest of the day’s meals. 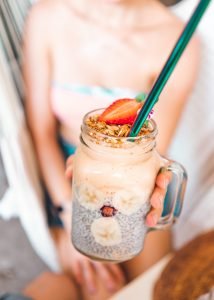 The Benefits of Food Combining

The Research Behind Food Combining

The little research on food combining that does exist does not show any more weight loss benefits than eating a balanced diet.

What Do the Critics Say?

Critics of food combining feel very strongly that there is no advantage in grouping foods. The body’s digestive process isn’t as simple as one enzyme breaking down one type of food at a time. In short, food combining’s theory grossly underestimates the body’s ability to multitask digesting.

Additionally, digestion is not limited to your stomach. Digestion starts when you put food in your mouth and continues into your small and large intestines. Food combining gives far too much credit to the stomach as a means of  and very little credit to the rest of the tract.

Lastly, even the idea that you can separate foods by macronutrients is triggering. Almost all foods are a combination of macronutrients—for example, a large egg has five grams of fat and six grams of protein. If you recall above, according to food combining rules, proteins and fats should not be combined. Why then, does our body not go into digestive disarray when we eat an egg?

Even though current scientific evidence does not support food combining as a means of weight loss or digestive optimization, there’s not much physical risk or harm in trying it. Since it doesn’t specifically eliminate any food groups or mention restrictive caloric intake, it cannot do significant damage physically.

There could be psychological harms associated with food combining, however. Any diet that requires extremely tedious tracking, counting, or monitoring can harm psychologically. When we rely so much on control and following rules, we create a habit of ignoring the perfectly functioning internal trackers we already have in our bodies! If you find food combining to be mentally overwhelming, it’s not for you. The added stress will outweigh any good food combing may do for digestion and weight.

Robert C. Fisher holds his Master of Science in Nursing (MSN), a Master of Business Administration in Healthcare Management (HCM), and is the Top Content Consulting team’s head content consultant. Robert specializes in using his professional writing experience to improve your content’s readability, search engine optimization, and ability to garner a targeted audience. As a creator himself, Robert strongly believes in using imagination alongside proper tone to produce a polished final product. He is currently accepting new clients, and you can book your free consultation today!

7 thoughts on “Food Combining: Does It Work?”